Genocidal slogans should not be banned

Murderous slogans should be explained rather than banned

Nadhim Zahawi, Britain’s education minister, has said universities should alert the police whenever student protestors use the anti-Israel slogan “from the river to the sea, Palestine will be free”. His move should be staunchly opposed.

Banning the slogan would be a serious assault on free speech. It would also make it harder to explain why it has a genocidal character.

Zahawi has justified his call on the grounds that it is favoured by Hamas; the Islamist organisation that controls the Gaza strip. In November 2001 the British government banned Hamas as a terrorist organisation.

But his reasoning for making the slogan illegal is disingenuous. Anti-Israel protestors at British universities are not engaging in an armed struggle. Nor is the slogan exclusive to Hamas; although it is certainly favoured by them.

Most student protestors who use the slogan probably do so in good faith. They genuinely believe they are supporting the Palestinians.

Westerners who hear the slogan are in most cases probably not even aware of the basic geography of the conflict. So, with apologies to those who already know it, I will outline that first. That is a precondition for understanding why that combination of words is so pernicious.

The slogan refers to the area from the Mediterranean sea to the river Jordan. At present that includes Israel within its internationally recognised borders, the Gaza strip (currently controlled by Hamas) and the West Bank (a complicated patchwork of Israeli and Palestinian areas with Israel having ultimate security control). Jerusalem has a complex status as Israel sees the whole city as an integral part of Israeli territory. In contrast, in international law a large part of the city is regarded as part of the West Bank.

In any event the clear implication of “from the river to the sea” is that none of the area should be under Israeli control. In that context “Palestine will be free” means at the very least that Israel will cease to exist.

In a parallel universe where Israelis voluntarily agreed to such an arrangement that would not be a problem. But in the world as it exists there is no doubt that the vast majority of Israelis would staunchly oppose such an arrangement. They earnestly want to exercise their right to national self-determination.  Under such circumstances the destruction of Israel could only be achieved by the use of a considerable amount of force.

There is no doubt that Hamas would have no compunction in using extreme violence to achieve its ends. Although its western apologists like to downplay it its 1988 covenant includes a clear call for anti-Semitic genocide. When speaking to a domestic audience its leaders have had no compunction in repeating such calls recently.

Those who argue the slogan can mean something else in the current context are either naïve or dishonest. It cannot, for example, simply be taken to be an expression of “how all Palestinians faced a shared struggle with Zionism regardless of where they lived”. There is a clear implicit call for the elimination of Israel. What is more the sad reality is that Israeli is facing an avowedly murderous Islamist enemy.

Explaining these complexities demands free and open debate. Banning the use of the slogan only makes that more difficult to achieve.

PHOTO: "From the River to the Sea" by jilliancyork is licensed under CC BY-NC-SA 2.0 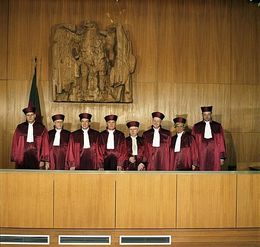