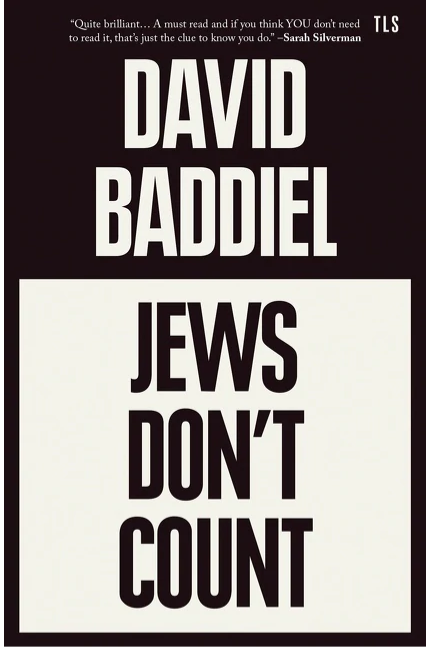 It is too late to simply review Jews Don’t Count in its own terms. It has become an international phenomenon with many famous endorsements and widespread popular acclaim.

At least part of the reason for the book’s appeal is easily discernible.  David Baddiel (a comedian and writer for the few who do not know of him) is an amiable host. He clearly says what he is going to do, is fair to those he criticises and makes his case well.

Political progressives, a group in which Baddiel includes himself, are the stated target of the book. The thrust of is argument, as reflected in the book’s title, is that they do not take Jews’ claims seriously in relation to racism. If they consider contemporary anti-Semitism at all it is viewed as a less serious form of racism.

Baddiel hits home when he discusses progressives’ double standards in relation to racism. For example, they are acutely sensitive to anti-black racism in literature but the blatant instances of anti-Semitism in TS Eliot’s poetry are generally ignored.

He is particularly good on the discussion of the alleged anti-Semitism of Jeremy Corbyn, the former Labour party leader. Baddiel makes his point by referring to the furore over the temporary mural painted by Mear One (Kalen Ockerman) in Tower Hamlets in 2012. The mural depicted a classic anti-Semitic trope with a group of stereotypically Jewish-looking bankers playing monopoly on the backs of the world’s poor. Corbyn initially defended the mural on the artist’s Facebook page but later said he regretted his endorsement.

In Baddiel’s convincing account, Corbyn at first did not see the overt anti-Semitism in the mural. He just saw a portrayal of oppressors versus the oppressed. For Corbyn it was an anti-capitalist image to which he could readily relate. It was only when the problem was pointed out to him that he grudgingly expressed his regret.

The problem is that Baddiel’s alternative to “Jews don’t count” is what could be called “Jews should count”. In other words, he wants the framework of identity politics to be tweaked to incorporate Jews. This is in line with the book’s sub-title: “how identity politics failed one particular identity”.

So he wants “white privilege” to be redefined to exclude Jews. For Baddiel being white in this sense is not about skin colour (and he recognises not all Jews are white in the literal sense). Instead it means: “you are protected because you are a member of the majority culture” (p43). So Jews, because they are a cultural minority in Baddiel’s account, should not count as white. Instead he suggests Jews should be recognised as BAME (black and minority ethnic) because they constitute a distinct minority ethnic group (p52).

From this perspective Jews Don’t Count can be seen as an enthusiastic endorsement of identity politics. Essentially his book is a special plea for Jews to be included within the identitarian worldview.

Baddiel does not see that identity politics itself is perhaps the central problem plaguing society today. It divides people up into different identity groups such as race, gender and sexuality. In its view the world has to be understood through this identitarian narrative. Transcending these cultural boundaries is no longer even regarded as desirable. From this perspective identity groups must count above everything else.

Not only is this problematic in principle but it has dangerous practical consequences too. Take Baddiel’s argument that Jews, like other ethnic minorities, should benefit from positive discrimination (P53). It is hard to think of a policy more likely to promote an anti-Semitic backlash. In a zero-sum world in which those classified as BAME get more then, by definition, the non-BAME get less. Such moves can and indeed do set different identity groups against each other in a struggle for limited resources.

Or take Baddiel’s well-known predilection to ban fans of Spurs ( Tottenham Hotspur Football Club) from publicly identifying themselves as “Yids”. This makes sense from the perspective of identity politics. In this view cultural boundaries need to be strictly policed to maintain an uneasy equilibrium between different identity groups. It is therefore strongly inclined to restricting free speech.

Baddiel’s slightly qualified embrace of identity politics also helps explain why the book has proved so popular. No doubt a healthy aversion to anti-Semitism and the clarity of his writing played a part in its popularity. But it is also an exceedingly safe critique of identity politics. It allows individuals to criticise one of the most blatantly negative consequences of the woke world view – its propensity for anti-Semitism – without challenging its substance.

The alternative to “Jews don’t count” should not be “Jews should count”. It is rather that races should not count at all ( or ethnic groups if Baddiel prefers to use that terminology). The ideal of “colour-blindness” – where what matters is the content of a person’s character rather than the colour of their skin – urgently needs to be reinstated.

Identity politics inherently sets different identity groups against each other. It should undoubtedly be recognised as a driving force behind the new woke form of anti-Semitism. But it is also a devastating problem for society as a whole.