The American president's approach to anti-Semitism is, if anything, likely to make matters worse

Joe Biden gave an object lesson in how not to fight bigotry at the United We Stand summit he hosted at the White House last week. The American president’s remarks focused almost entirely on the far right to the exclusion of other forms of anti-Semitism in particular and bigotry in general. Although a lot of his comments focused on Jews he also mentioned other religious groups, Asian Americans, native Americans and the disabled as victims of violence. His proposed solution to hostility against all of them primarily involved clamping down on free speech.

Biden referred to white supremacists six times in his remarks. He also mentioned the far right Unite the Right rally in Charlottesville, Virginia, in August 2017 three times. At that demonstration one of the protestors drove into a crowd killing one person and injuring 19.

Biden said it was the event at Charlottesville that prompted him to run for president: “When those folks came out of those — that field carrying torches — the United States of America — carrying torches, chanting the same antisemitic bile that was chanted in Germany in the early ’30s, accompanied by white supremacists holding Nazi flags.  And I thought to myself, ‘My God, this is the United States of America’ — Senator — ‘How could it happen?’."

He also referred to the attack on the Tree of Life Synagogue in Pittsburgh in 2018 in which 11 people were killed in the deadliest attack on Jews in American history. The lone perpetrator was a far right extremist.

Naturally such tragic events should not be forgotten. On the contrary, it is vital that they are remembered and that the far right should be countered whenever it raises its hideous head.

But this one-sided view neglects several key facets of anti-Semitism in contemporary America. For a start a significant proportion of the violent attacks on members of the Jewish community is by black Americans. The most deadly occurred in 2019 Jersey City shooting when five people were shot dead at a kosher grocery store. One of the shooters was a member of the Black Hebrew Israelite movement - an extremist sect.

Of course only a tiny minority of blacks would dream of attacking Jews or indeed members of other social groups. The vast majority of black Americans would never engage in such activity. But then it is also true that the number of whites who have assaulted Jews constitutes a minute proportion of the overall population. Yet crass notions of “white supremacy” are casually thrown around as the single problem to highlight in relation to communal hatred.

Then there is the dark shadow of Islamism. Biden’s focus completely failed to mention Islamist violence. For example, four hostages were taken at the Colleyville Synagogue in Texas this year. It is likely they would have been killed if they had not managed to escape. The perpetrator in that case was an Islamist who had come over from Britain.

It is also important to note – although it is rarely commented upon – that the 9/11 al-Qaeda terrorist attacks on New York and Washington DC in 2001 were at least partly motivated by anti-Semitism. Although the almost 3,000 victims came from 93 countries  there was a strong element of anti-Semitism in al-Qaeda’s worldview. From its warped perspective America was a stooge for Jewish power. For example, the 2002 “letter to the American people” by Osama bin Laden, then al-Qaeda leader, mentioned Jews 11 times. Naturally all the references were derogatory but this one perhaps gives the clearest idea of his view that Jews dominate America: “Your law is the law of the rich and wealthy people, who hold sway in their political parties, and fund their election campaigns with their gifts. Behind them stand the Jews, who control your policies, media and economy.”

Perhaps least surprising of all is Biden’s unwillingness to mention anti-Semitism emanating from the identitarian left. Although its supporters do not generally engage in physical attacks on Jews their notions of white privilege are having a grave effect in rehabilitating old anti-Semitic notions. Most notably in the discussion of “white privilege” Jews are often presented as “hyper white”: the greatest beneficiaries of whiteness. In this way the old notions of Jews secretly dominating American society are brought back to life.

In this context it is also important to note that Asian-Americans are also being increasingly cast as beneficiaries of white privilege. Despite many being the descendants of relatively recent migrants to America they are still portrayed as being near the top of a hierarchy of privilege.

No doubt Biden would distance himself from any hostility to Jews or Asian Americans but he is certainly in sympathy with the woke world view. Not to mention the problem at all at last week’s White House remarks was a stark illustration of his one-sidedness.

Biden proposed opposition to what he called “hate-fuelled violence” and “hate-motivated violence” as central to his strategy for dealing with these problems. But a little reflection should make clear the problems with this approach.

It has always been a foundational principle of American democracy that violent attacks on people and indeed property are illegal whatever the motivation. The public an only legitimately use violence in self-defence.

Biden’s use of the term “hate-filled violence” blurs the line between speech and physical violence. That is why involving technology companies such as Meta (the owner of Facebook, Instagram and WhatsApp), Microsoft, Twitch and YouTube is a central plank of the strategy. The White House is keen to curb not just incitement but the expression of any non-mainstream views on social media.

It is not necessary to support Donald Trump to see the banning of him by Facebook and Twitter has already set a dangerous precedent. If someone as powerful as the former president can be banned then those of us with much less social influence are acutely vulnerable. Social media companies, with the backing of leading American politicians, are becoming increasingly intolerant of those with alternative views.

Yet the narrowly focused debate on anti-Semitism provides a perfect example of why broader discussion is needed. Biden’s speech outlined a strategy so focussed on the far right that it missed the serious dangers from Islamism and the woke left.

The president’s approach to tackling anti-Semitism is doomed to failure. It wilfully looks in one direction while precluding the possibility that the main threat could come from elsewhere. Indeed if anything it is likely to make matters worse.

Discussion at the Battle of Ideas 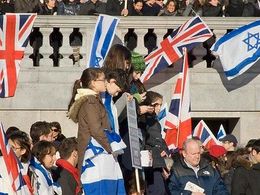