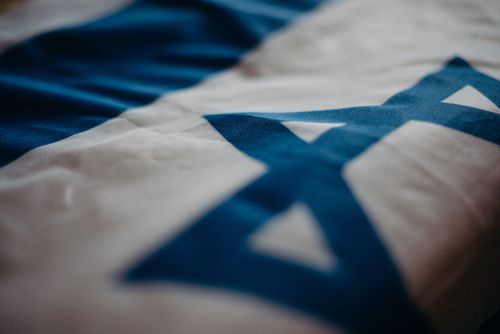 Israel is no Goliath

Western critics inflate Israel's power and ignore the strength of the threat it faces.

The following article was originally published on spiked-online on 4 September 2021.

There is one key point on which most of Israel’s critics agree – namely, that the recent conflict in Gaza was a hugely uneven one between a military superpower and a largely helpless victim.

This assumption was apparent in much of the imagery used to illustrate the conflict. One would often see footage of the Israeli air force, equipped with sophisticated weaponry, laying waste to Palestinian apartment buildings. Or photos of young Palestinian protesters inside Israel firing slingshots against armed Israeli troops. The echoes of the Biblical story of David and Goliath were difficult to miss.

But this vision of a mighty Israel crushing poor Palestinian civilians is highly misleading for two reasons. First, Israel is far from being a superpower – even in military terms it is much weaker than its critics suggest. And second, the contemporary conflict is not a simple bipartite one between Israel and the Palestinians. Rather, it involves at least three main parties in the wider region: Israel, the Palestinians and Islamism.

The latter distinction, between the Palestinians and Islamism, is a crucial one to understand. For one thing, Hamas (the Arabic acronym for the Islamic Resistance Movement) in Gaza, has substantial external Islamic support, including military backing from Iran and financial support from Qatar. It also has a powerful Islamist military ally in Hezbollah (the Party of God) in Lebanon, which is also backed by Iran.

Israel is not a superpower

The first key mistake in the ‘David and Goliath’ analogies is to view Israel as a superpower. Even in terms of its military strength, it is at most a middleweight.

A comparison with Britain – a middle-ranking world power – is instructive. On the geographical front, Britain (242,495 square kilometres) is far larger than Israel (22,145 square kilometres). There is a similar disparity in relation to population. Britain’s population is about 67.4million, while Israel’s is about 9.4million. (It is also worth remembering that only about 74 per cent of Israel’s residents are Jewish, while about 21 per cent of residents are Palestinian and five per cent are from other groups.)

In relation to the economy, the balance is also heavily weighted towards Britain. According to the IMF, Britain’s GDP this year will be about $3.1 trillion compared with $447 billion for Israel.

So by all of these key metrics – geographical, demographic and economic – Israel is dwarfed by even a middle-ranked power like Britain, let alone actual superpowers like the US and China.

Of course, Israel does indeed have a large and powerful military relative to its small size. But even that should not be overstated.

The annual Global Firepower ranking provides a useful rough guide. It puts Israel in the world’s top-20 strongest militaries – but only just, at No20. Britain, in comparison, was ranked at No8. A key difference is that Britain has the capacity to project substantial amounts of power well beyond its borders – through the use of aircraft carriers, for instance – whereas Israel has no such capacity.

Perhaps even more striking is that several countries within the Middle East are more highly ranked militarily than Israel. These include Turkey at No11, Egypt at No13, Iran at No14 and Saudi Arabia at No17. So Israel has only the fifth most powerful armed forces in the region.

It is an open secret that Israel has some atomic weapons. But remember that – in addition to the US, Russia, Britain, France and China – India, Pakistan and North Korea also have atomic weapons. Yet few would describe those countries as superpowers.

It should also be remembered that Israel is facing threats on several fronts. To the north is Lebanon and Hezbollah. A 2018 report by the Centre for Strategic and International Studies, a US think-tank, described Hezbollah as ‘the world’s most heavily armed non-state actor’. It estimated that it had 130,000 rockets and missiles. The Israeli military now puts that figure at 150,000, and says that Hezbollah has the capacity to fire 1,000 to 3,000 rockets and missiles per day on Israel.

Furthermore, Lebanon’s economic collapse – the World Bank says it is facing the third most severe crisis globally since the mid-19th century – is likely to lead to even greater regional instability.

To the north-east is Syria, which has been mired in a bloody civil war for over a decade, with hundreds of thousands reported killed and 12million people – over half its pre-war population – displaced.

And then to the east, there is Jordan, and to the south, Egypt. Israel has peace agreements with both, but relations are often frosty. Egypt, in particular, has the capacity to pose a considerable military threat to Israel should it choose to do so.

Finally, there is Hamas in Gaza. Of course, in a straight fight on an open battlefield between Israel and Hamas, the Israeli army would easily win. But that situation does not exist – not least because Israel has to protect itself against simultaneous threats on several fronts.

Moreover, Hamas’s military capacity is not trivial. Indeed, the most striking feature of the recent military conflict was that Israel’s attacks came predominantly from aircraft and drones. There was no invasion by Israeli ground forces. This was likely because Hamas’s system of underground tunnels makes any ground invasion very difficult, and likely to lead to the loss of many lives on both sides. And remember, Hamas is not without weaponry – it fired over 4,000 missiles at Israeli targets during the most recent conflict.

Hamas also has other forms of offensive military capacity that are not well known in the West. For example, it has naval commando units that could potentially cause carnage in Israel’s heavily populated Mediterranean coastal cities.

So, Hamas’s military capacity is greater than many realise, while Israel’s relative strength, even in military terms, is grossly exaggerated by its critics. By any rational measure it is far from even being a middle-ranked power.

Of course, those of a conspiratorial mindset will argue that Israel boosts its strength by manipulating Western powers, and the US in particular, to its advantage. These visions of Israel as the power behind Western thrones are based less on reality, however, than on classic anti-Semitism.

Western critics of Israel tend to assume that Hamas is committed to Palestinian rights and national self-determination. This could not be further from the truth. Hamas is completely against Palestinian freedom.

This is abundantly clear from the Hamas Covenant, first published in 1988.

As is common for such documents, it contains clauses which, particularly when taken out of context, can be read in contradictory ways. This is probably clearest in relation to its attitude towards Jews. For example, at times it appears to be advocating genocide, such as the use of this quote from the Prophet Muhammad:

‘The Day of Judgement will not come about until Muslims fight the Jews (killing the Jews), when the Jew will hide behind stones and trees. The stones and trees will say “O Muslims, O Abdulla, there is a Jew behind me, come and kill him”. Only the Gharkad tree, (evidently a certain kind of tree) would not do that because it is one of the trees of the Jews.’

In some other passages, however, Hamas appears more tolerant: ‘Under the wing of Islam, it is possible for the followers of the three religions – Islam, Christianity and Judaism – to coexist in peace and quiet with each other.’

The most charitable reading of Hamas’s intentions is that it would accept Jews as long as they submitted to Islamic theocratic rule.

What is clear, however, is that Hamas defines itself as part of a broader Islamic movement. It is not fighting specifically for Palestinian liberation. For example, it states: ‘The movement [Hamas] is but one squadron that should be supported by more and more squadrons from this vast Arab and Islamic world, until the enemy is vanquished and Allah’s victory is realised.’

Similarly it says that Hamas is ‘one of the wings of Muslim Brotherhood’, ‘a universal organisation which constitutes the largest Islamic movement in modern times’. So, Palestinian nationalism, to the extent it exists at all for Hamas, is clearly subordinate to broader Islamist goals.

A key concept in the covenant is to be found in article 11, where it characterises the historical land of Palestine as a sacred Islamic Waqf (a Muslim endowment). In other words, Hamas sees itself as fighting an Islamic struggle for a historically Muslim land. It believes that Palestine ‘is an Islamic Waqf consecrated for future Muslim generations until Judgement Day. It, or any part of it, should not be squandered: it, or any part of it, should not be given up.’ The covenant then goes on to reject the right of the secular authorities, Arab or otherwise, to make any concessions on this goal.

In this sense, Hamas is not a movement for Palestinian national self-determination. On the contrary, it views itself as part of a broader Islamic struggle to put the whole of the Arab and Muslim world under Islamist rule. Israel is seen as a particular abomination because it represents Jewish control over Islamic Waqf land – particularly the Islamic holy sites of Jerusalem, such as the al-Aqsa mosque. Jews are generally viewed as active agents in this evil process.

There are some who claim that Hamas has moderated its stance since the covenant was published. They point, for example, to a 2017 policy document which toned down some of the earlier genocidal language towards Jews, while maintaining the same general political approach.

Such claims invite scepticism. For example, a long-time member of Hamas’s politburo recently issued a bloodcurdling call for Muslims to murder Jews. Hamas also still routinely presents itself – including in its 2017 document – as a transnational Islamist movement, determined to promote theocratic rule more widely.

So while Hamas is certainly anti-Israel – and anti-Semitic – it is also opposed to Palestinian national self-determination. Many Palestinians may at present supportHamas, but this is not a movement for their liberation. Its aim, rather, is to place all inhabitants of the Middle East under Islamic theocratic rule.

The question of Palestinian national self-determination is clearly very difficult to resolve. The Palestinian people are scattered across the region – both within areas controlled by Israel and beyond. Their individual rights vary hugely depending on where they live. For example, those living in Israel have Israeli citizenship, except in Jerusalem where they are mostly limited to permanent resident status (although, according to international law, annexed East Jerusalem is regarded as part of the West Bank). The West Bank is a complicated patchwork with overall control maintained by Israel, but with some areas under the auspices of the Palestinian Authority. The Gaza strip is under Hamas control, although the areas surrounding it are controlled by Israel and, on one side, Egypt.

Others live in a Palestinian diaspora, including sizeable populations in Jordan, Syria, Lebanon, Saudi Arabia and Egypt. There are large Palestinian communities in other parts of the world, too.

Collectively, there is still no way in which Palestinians can express their national aspirations. This is an easy problem to identify in the abstract but, as history has shown, immensely difficult to resolve in practice. The only certainty is that a genuine solution must be found by those living in the region. It cannot be imposed by outsiders.

This is why it is important to understand the reality of the situation in Israel and Gaza. Viewing Israel as a superpower helps neither of the two peoples. And assuming that Hamas is fighting for Palestinian freedom is a travesty of the truth. If anything, Hamas supports the Islamist goal of subjugating all those living in the Middle East – Jews, Christians, Muslims and others – under a regional caliphate.

Until the Israeli-Palestinian conflict is understood in a far more balanced way, there is no prospect for peace or resolution.