Those who want to see a textbook example of the anti-imperialism of fools can refer to the Mapping Project launched last month in the Boston area. It comes complete with nightmarish graphics showing Jewish-related networks at the centre of a web of domination over American society.

This is clearly spelt out, for example, in an article published by the project on Zionism, Policing and Empire. It includes a graphic showing the Anti-Defamation League (ADL)  – an international Jewish non-governmental organisation that defines its role as fighting hate – as the central node in a myriad of powerful organisations ranging from Harvard University to the FBI.

Yet the Mapping Project presumably sees itself as part of the enlightened left rather than the far right. It defines itself in the following terms: “We are a multi-generational collective of activists and organizers on the land of the Massachusett, Pawtucket, Naumkeag, and other tribal nations (Boston, Cambridge, and surrounding areas) who wanted to develop a deeper understanding of local institutional support for the colonization of Palestine and harms that we see as linked, such as policing, US imperialism, and displacement/ethnic cleansing.”

The Mapping Project itself has been strangely quiet on the charges of anti-Semitism that have inevitably (and rightly) been levelled against. However, its allies have leapt to its defence. For example, Mondoweiss, a stanchly anti-Israel publication, has pointed to figures showing only 6% of the entities identified by the Mapping Project are Jewish.

But that is a disingenuous defence. On the contrary, it is completely consistent with the view that a small number of Jewish-related organisations play a predominant role in American society. The Mapping Project starts from the premise that ‘Israel’ and ‘Zionism’ are extremely powerful. It also points to “institutional support for the colonization of Palestine” as being central to many American institutions. Admittedly it does not name Jews as such as guilty but it would be hard to resist that conclusion given the campaign’s premise.

As I have previously argued on this website Israel is relatively weak in geopolitical terms by any reasonable measures. But anyone determined enough to believe such conspiracy theories is immune to objective evidence.

It should be noted that the Boycott, Disinvestment and Sanctions (BDS) movement has issued a statement saying it does not endorse the project although it does not make it clear why. It certainly does not mention anti-Semitism. But at the same time it says it unequivocally: “reject(s) and condemn(s) the cynical use of this project as a pretext for repressive attacks on the Palestine solidarity movement by anti-Palestinian racists and apologists for Israeli apartheid.” And a critical article in Mondoweiss, a publication generally in favour of the project, rejected the charge of anti-Semitism but said the project was poorly researched.

In any case it seems to me that The Mapping Project simply draws out more graphically what is already clear in the mainstream BDS approach. Both see Israeli power – and by extension Jewish power (excluding anti-Zionist Jews) – completely out of proportion to its real weight in the world. This lack of perspective inevitably exacerbates anti-Semitism. 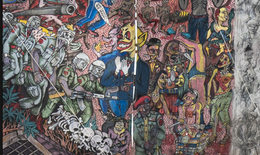 When the 'anti-imperialism of fools' took off