The Australian has published an article by me on the nineteenth century German composer’s undoubted anti-Semitism.

Unfortunately the article is behind a paywall, so only subscribers can access it, but I will post some of the key points along with supplementary materials here.

*There is no doubt that the nineteenth century (1813-1883) German composer, theatre producer and writer was anti-Semitic. It is true that there is an exceedingly low bar for accusations of racism nowadays but in Wagner’s case the allegation is entirely justified. Even by the standards of his time he was ardently anti-Semitic. His notorious 1850 essay on Das Judenthum in der Musik (Judaism in Music) gives a clear indication of his vile views.

*However, it is unfair to blame him for the crimes of the Nazi regime. It is true that Hitler adored Wagner but the Nazi dictator was not born till 1889 while the composer died in 1883. Wagner’s also died decades before the foundation of the Nazi party in 1920.

*Wagner expressed a new form of anti-Semitism. He often disparaged Christianity so he was not attached to the older Christian forms of anti-Semitism. For example, blaming Jews for the death of Jesus. Instead Wagner saw Jews as the antithesis of the emerging German cultural identity. Also, as an anti-modernist, he associated Jews with modernity. The movement towards a more economically developed and politically unified Germany helped provide the backdrop to the formation of these views.

*Despite Wagner’s undoubted anti-Semitism it would be wrong to ban the performance of his work (as has de facto been the case in Israel for a long time). Many regard him as one of the greatest composers of all time. Even if he was not such a ban would be an assault on free speech.

*My article was based on a visit to the exhibition on “Richard Wagner and the nationalization of feeling” at the German Historical Museum in Berlin. It runs until 11 September.

*The appendix on “Wagner’s anti-Semitism” in Bryan Magee’s 2001 book on Wagner and Philosophy is well worth reading.

PS: 26 April 2022. The Haifa Symphony Orchestra is reportedly planning to break Israel's Wagner taboo and play one of Wagner's symphonies. 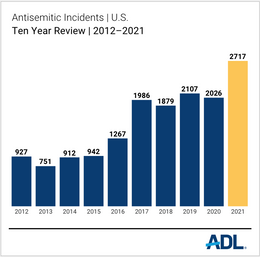 Islamists are playing a cynical game in Jerusalem