A take on one of the classic texts on anti-Semitism

Bernard Lewis (1916-2018) was once considered one of the foremost academic historians and public intellectuals specialising in Islam and the Middle East. In an exceptionally long career he developed an encyclopedic knowledge of the region as well as mastering Arabic, Farsi, Hebrew and Turkish. Yet in contemporary academia he is often reviled.

Yesterday’s webinar organised by Indiana University’s Institute for the Study of Anti-Semitism (ISCA) provided a window onto his work on anti-Semitism. Martin Kramer, who studied for his doctorate under Lewis at Princeton, introduced a discussion his book on Semites and Anti-Semites ( the YouTube link is available here). The webinar provided an excellent introduction to the Anglo-American historian’s writings on the subject in relation to the Arab world in particular.

Lewis’s specialist interest in anti-Semitism did not emerge until what for most people would be considered late career (Lewis lived until he was 102 so he was an exception). His two most significant works on the subject were written when he was in his seventies. The Jews of Islam came out in 1984 while Semites and Anti-Semites  came out in 1986. The focus of both was anti-Semitism in the Arab world. Kramer suggested that Lewis was partly prompted to write these works because he, as a Jew, was barred from entering  many Arab countries.

The thesis of The Jews of Islam was that the Muslims in their heyday were relatively tolerant towards Jews. This does not mean that Jews were considered equal. On the contrary, they were granted dhimmi status which meant they suffered institutionalised discrimination. Jews from this perspective were viewed as physically weak and cowardly. But their experience was more benign than under Christendom when they were often regarded as part of a vast, evil conspiracy. In the Christian world Jews were viewed with fear rather than contempt.

It was in Europe rather than the Middle East where, in Lewis’s view, a religious prejudice turned into a murderous political doctrine. Jews were regarded as the source of cosmic evil and the pseudo-scientific category of Semites itself was created. Both the Nazis and the Soviets took up these ideas and incorporated them into their own outlooks.

Lewis argued that although the idea of Jews as representing cosmic evil did not emerge in the Arab world it did import them. In the early twentieth century it was Christian missionaries who played a key role in this process while later on Nazi and Soviet influence was key. (For a short video clip of Lewis outlining his notion of anti-Semitism as “cosmic evil” and its importation into the Arab world see below).

In Semites and Anti-Semites he went on to argue that the Holocaust should have inoculated the world against anti-Semitism. However, it re-emerged in the form of excessive hatred of the state of Israel. This is what Abba Eban (1915-2002) - an Israeli politician, diplomat and childhood friend of Lewis, dubbed “the new anti-Semitism” as far back as 1972. Bernard Lewis himself wrote a piece on the new anti-Semitism for the New York Review in 1986.

Of course there were critics of Lewis’s approach to Arab anti-Semitism. Edward Said (1935-2003), a noted Palestinian-American intellectual, according to Kramer criticised Lewis for not discussing anti-Arab racism in Israel. Arthur Hertzberg  (1921-2006), both a rabbi and a political activist, made a similar criticism. If this really was the basis for their critique, as Kramer contended, it was not a substantial one. The claim of extensive anti-Arab racism in Israel, even if entirely true, would not disprove Lewis’s argument on the character of Arab anti-Semitism.

Kramer argued that a more interesting critique of Lewis’s argument came from Robert Wistrich (1945-2015); generally recognised as one of the world’s foremost experts on anti-Semitism. In a review in Commentary, a monthly magazine, Wistrich argued that Lewis overstated the external influences on anti-Semitism in the Arab world.

I should end by emphasising that I do not necessarily agree with all of Lewis’s arguments. For one thing I think the points made by his critics need to be carefully considered. It should also be noted that Lewis wrote his key works on anti-Semitism before Islamism came to the fore. As a result he did not focus on what arguably could be key points in the current discussion. Nevertheless I do believe he was a serious scholar whose works should be the subject of careful study. 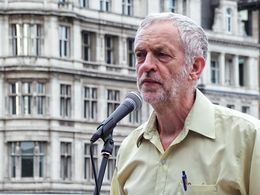 Discussion at the Battle of Ideas